We recently put together an infographic highlighting some of the snowiest areas of the United States. As we placed the locations on a map, a visible trend emerged. The vast majority of these cities were in the Great Lakes region. We also saw locations near the Great Salt Lake and Cape Cod Bay make the list. 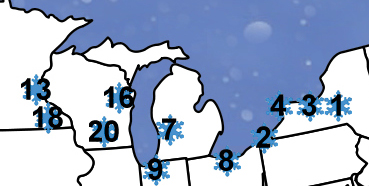 Why are these areas buried in snow? Well if you are from one of these regions you probably know the answer: Lake-effect snow, sometimes called ocean-effect or bay-effect snow. Lake-effect snow occurs when cold air moves over a body of water, picking up water vapor and then dumping it in large quantities of snow when it reaches shore.

The result is a lot of snow in a short time, often in a smaller geographic area.

The key to lake-effect snow is the temperature difference between the air and water. When the air is colder than than the water it is traveling over it picks up moisture for snowfall. As lakes freeze over, lake-effect snow ceases to occur.

In addition to cold air and warmer water, the distance the air moves over the lake is another major factor in the forming of lake-effect storms. Warmquest is headquartered near the Great Salt Lake in Utah, an area impacted by lake-effect snow. These storms peak when they move across the longest portion of the lake, gathering more water vapor.